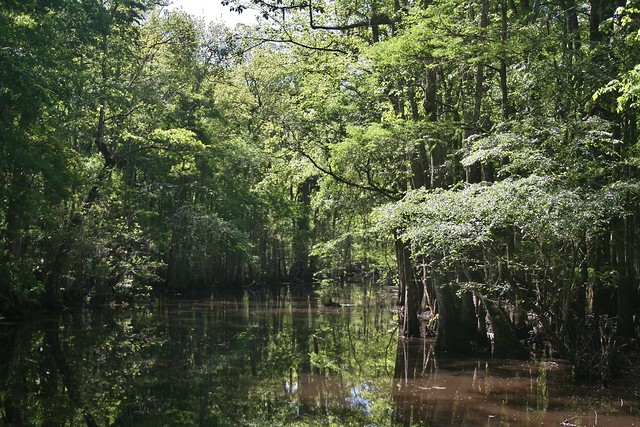 The CYBC was graciously invited by the team at Francis Beidler Forest to band Prothonotary Warblers and to explore one of America’s oldest cypress-tupelo swamps. Four young birders were able to make it. We were led by Matt Johnson, Education Manager at Francis Beidler, who took us on an excellent boardwalk tour. Even before we left the Audubon center, we were greeted by male Ruby-throated Hummingbirds and the songs of Red-eyed Vireos, Northern Parulas, and our target birds- Prothonotary Warblers.

Francis Beidler is ancient. It’s actually located in the Four Holes Swamp, a blackwater river. I found it similar to Congaree National Park, but the main differences between the two locations is that Congaree is a floodplain, while Francis Beidler has actual water flow. The swamp was never logged, and SC Audubon has done an excellent job of preserving it and making human impact minimal. Matt showed us an ancient Bald Cypress that was at least 900 years old, and that wasn’t even the oldest tree there!

Matt is in charge of Project Protho, a project to document the migrant and breeding Prothonotary Warblers. By putting color bands on the birds, visitors can document the birds as they visit. You can read more about the project on South Carolina Audubon’s site: http://sc.audubon.org/conservation/what-project-protho 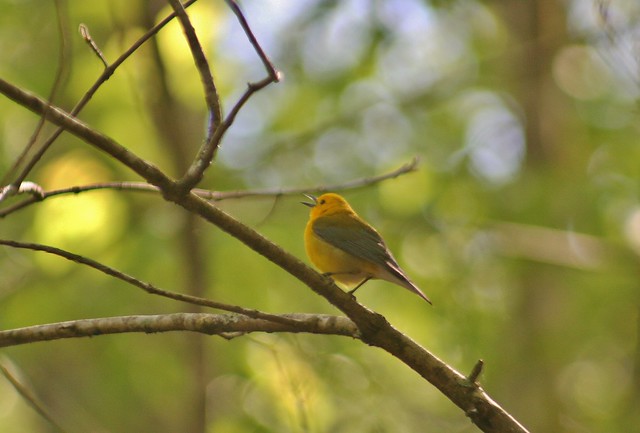 The swamp was ringing with the sounds of Prothonotaries as we started the boardwalk tour. We soon spotted an unbanded male singing persistently. He responded a little to our playback, so Matt decided to see if we could catch him. We set up the mist net along the boardwalk. The net is custom-made to fit the sides of the boardwalk, so it was a quick setup. There was also a hand-carved Prothonotary Warbler decoy and a speaker to play the song. 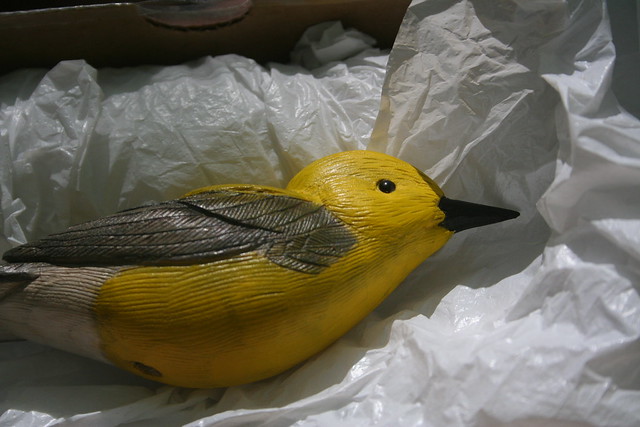 Unfortunately, this male wasn’t interested enough to fly into the net. We left him alone after a few minutes of playback. However, he did get very close and we got some great views! 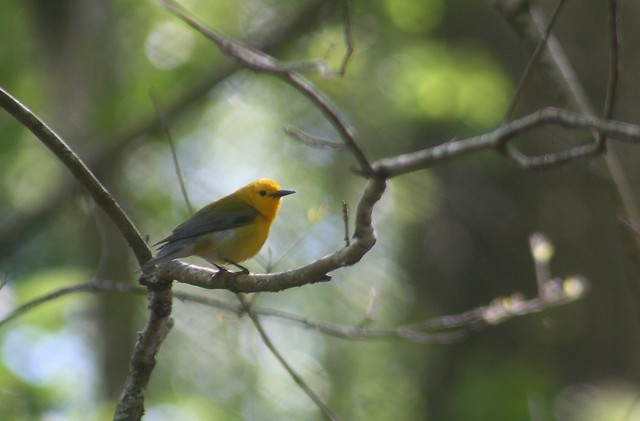 One of the highlights for me, personally, was the amount of snakes we saw. Despite my best efforts, I rarely see snakes, but at Beidler it was impossible to miss any snakes. Many enjoyed sunning on the many fallen logs throughout the swamp. Brown Water Snakes were the most common species we saw. We also saw two Cottonmouths and a Banded Water Snake. 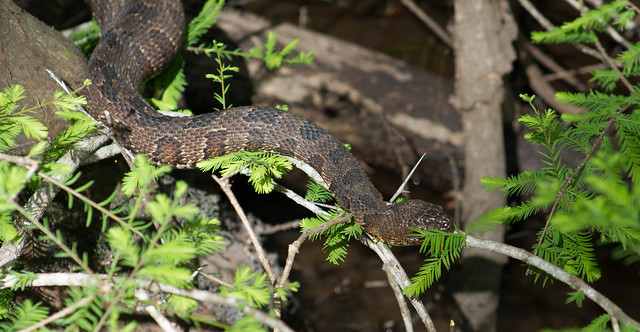 It wasn’t long until we heard another singing Prothonotary. We found him quite easily- no bands! Matt quickly set up the net. He was responsive for sure, but would he fly into the net? We anxiously watched as he buzzed the top of the net, flying low but not low enough. Finally, he hit the net and dropped! Matt scrambled to untangle him and started to process him. 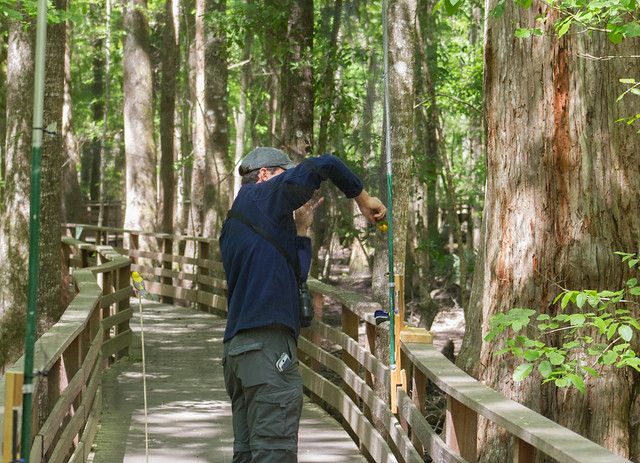 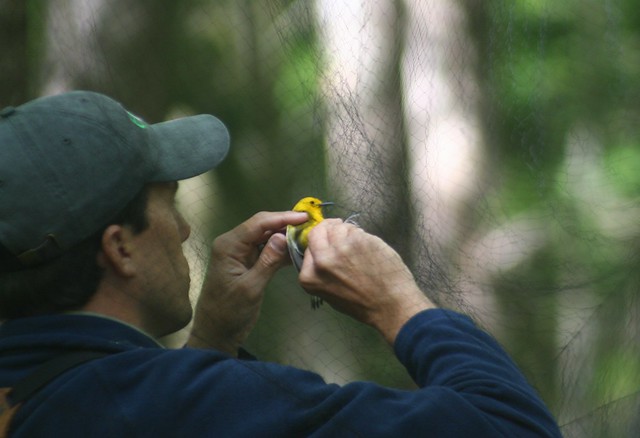 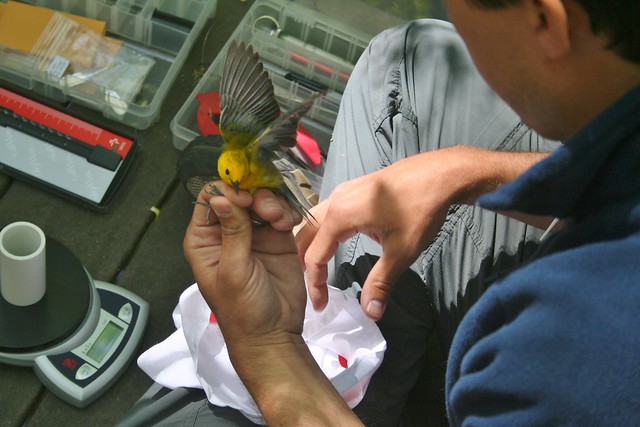 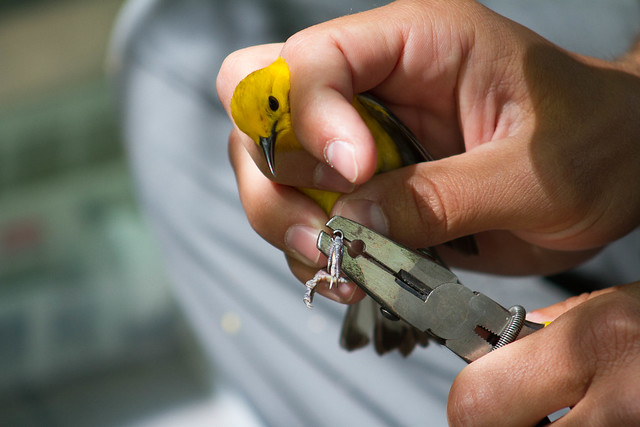 He was first banded- one metal USGS band and 3 colored bands. Reading his bands from lower left to upper left, and then upper right to lower right, he would be aluminum (USGS band), split red/blue, white, blue. 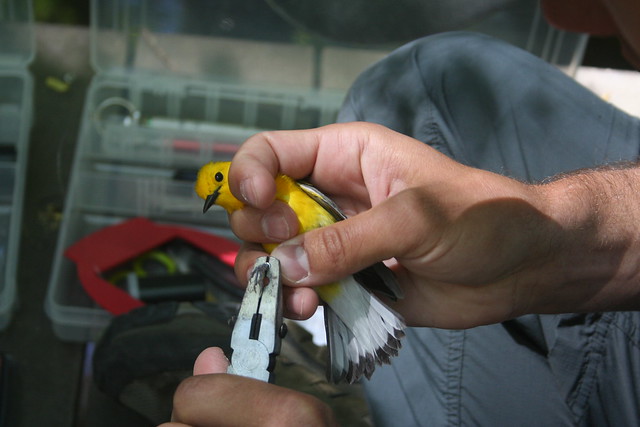 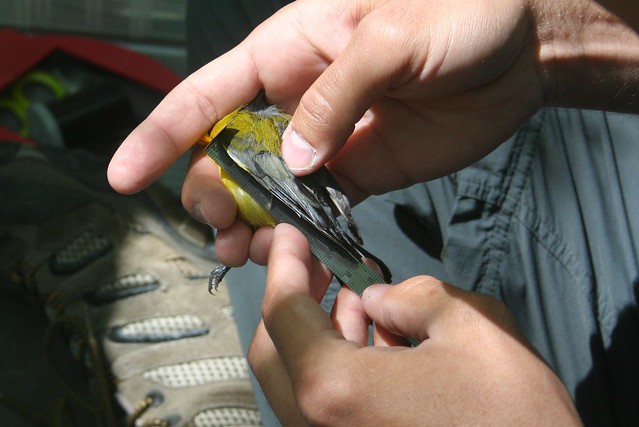 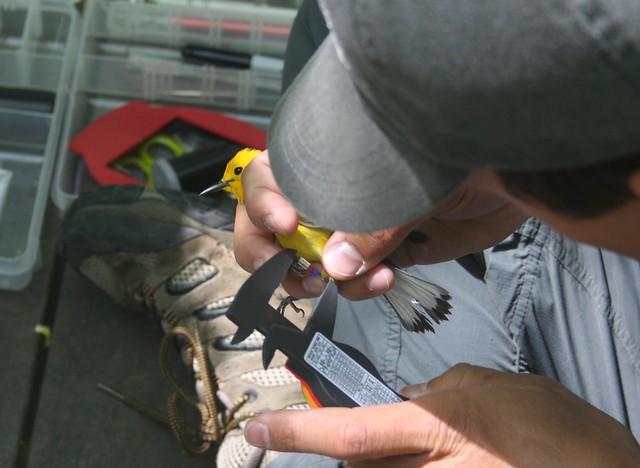 Unfortunately, when weighing him, he managed to wiggle his way free and flew off into the swamp. Luckily, we had all of his data recorded, but it was a little disappointing. He obviously was a little ruffled as I watched him preen his feathers back into shape!

It was a great experience overall! Hopefully in the future we'll be able to head down and band some more Prothonotaries. Thanks again to Matt Johnson and the team at Francis Beidler for inviting us! 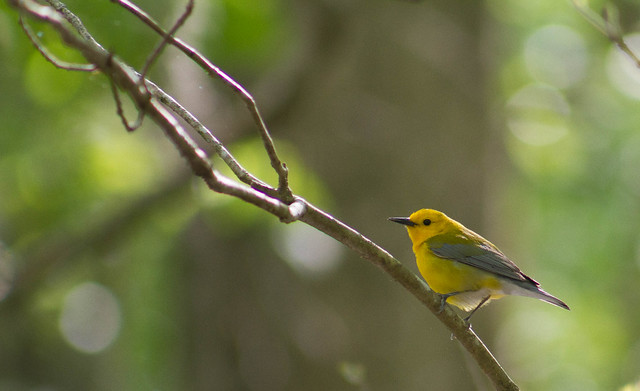 Here's our eBird checklist, by the way: http://ebird.org/ebird/ybn/view/checklist?subID=S29007544